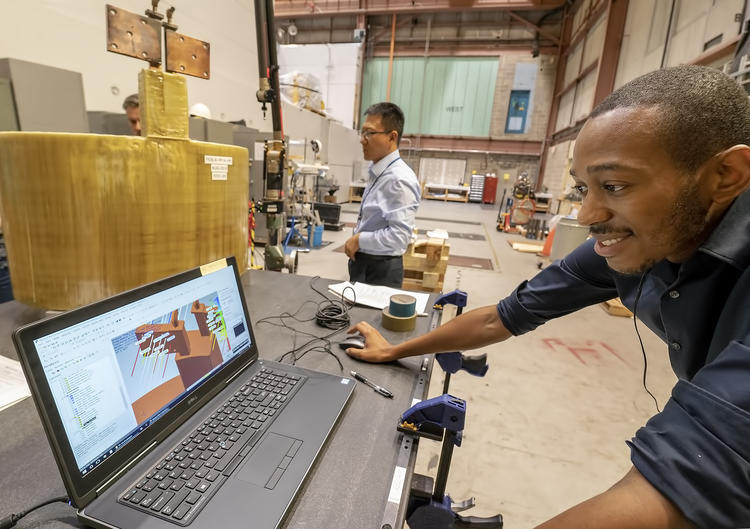 PPPL’s world-class engineers play a crucial role in meeting one of the grand challenges of the 21st century: developing fusion as the energy source for the future to power the U.S. and the world. Engineers also are key to PPPL’s mission to advance nanoscale fabrication for industries of the future and furthering the scientific understanding of the plasma universe.

Together with PPPL’s physicists, PPPL engineers are rebuilding PPPL’s flagship experiment – the National Spherical Torus Experiment-Upgrade (NSTX-U), which confines and heats a super-hot plasma at temperatures hotter than the sun in a device called a tokamak. To do this, PPPL engineers design complex electrical and mechanical systems using sophisticated analysis tools to create state-of-the-art components and materials. The objective is to test whether a cored apple-shaped compact spherical tokamak could be a good model for a smaller and more affordable fusion energy device. (Link to the PPPL Engineering website).

Many of PPPL’s engineers are also inventors who work closely with physicists and partners in industry on inventions, like a new method to use low-temperature plasmas to disinfect surfaces and kill viruses or bacteria.

The National Spherical Torus Experiment-Upgrade (NSTX-U) is PPPL’s flagship experiment. This tokamak, or toroidal fusion device, confines superhot plasma within magnetic fields lines to produce fusion reactions like those in our sun. The objective is to test whether a cored apple-shaped compact spherical tokamak could be a good model for a smaller and more affordable fusion energy device.

PPPL is currently replacing some of the key components of the NSTX-U, and PPPL engineers are integral to those efforts. This includes CAD designers, analysts, mechanical and electrical engineers, project managers, and many others. PPPL engineers have traveled to Finland, France, England, and Italy, to work with manufacturers, designed unique electrical tests for key magnets, and built devices to construct magnets in the Laboratory.

PPPL encourages and supports our engineers who are also inventors. PPPL engineers have won numerous awards for inventions aimed at addressing important problems. These include an on-demand method to create a badly-needed isotope used in medical imaging devices, a novel method to pasteurize eggs using radio frequency waves, and a device that ferrets out nuclear materials that could be used to produce weapons. Information on Technology Transfer is available here.

Engineering the Technologies of the Future

Our engineers help explore technologies of the future, like our Low Temperature Plasma Laboratory where scientists investigate room temperature, or cold plasmas, for industries from semiconductors to space.

Engineers also play a vital part of PPPL’s international collaborations at fusion experiments around the world. This includes designing a complex diagnostic device for the international fusion experiment called ITER in France and numerous other fusion experiments in the U.S. and around the world. These include  DIII-D at General Atomics in California, the Asdex-Upgrade and Wendelstein 7-X in Germany, the Experimental Advanced Superconducting Tokamak (EAST) in China, and the Korean Superconducting Tokamak Advanced Research (KSTAR) in Korea.